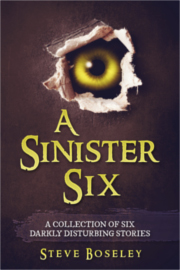 Been another busy week at work, so I’ve noticed a slow blog week. But I’m off work at the time of writing, so I wanted to get the next part of this story ready to go.

We’ve been following the story of MIKE, a man who believes he is slowly losing his grip on sanity and is struggling to recognise what is real and what isn’t. Last time, Mike had gone to work, hoping to escape the hallucinations that he had been having at home, but with no luck. The disembodied eye seems to have followed him to the garage where he works, causing Mike to walk off, leaving his colleague wondering what is going on.

You can read the first part HERE and the most recent part HERE.

On to today’s part, and what happens next for an increasingly troubled Mike…

The stars were slowly becoming visible as Mike trudged along the street. Each step felt like effort that he didn’t want to spend, but the night air was refreshing. A light breeze ruffled his hair as he walked and when he caught sight of his reflection in a window, he smiled; he looked like a Muppet himself, hair sticking out at odd angles.

“More gravy than grave,” he continued to chant under his breath, drawing some questioning glances from people walking past him. He didn’t care. He just needed to get home and fall into bed. Perhaps a beer or two would do the trick. It was probably beer that got you in to this mess. Or Wine. Or both.He probably shouldn’t, but he struggled to think of a situation where beer wasn’t the answer.

As he approached a group of shops, he saw that a late night store was open. They would probably sell beer. Wait till I get home?He heard himself ask the question. He couldn’t be sure if he had thought it or said it, but either way, he was standing, looking into the shop window.

The shop was called ‘Jacob’s’. Inside he could see two aisles of foodstuffs and a freezer at the back. The beer must be back there somewhere. He stood looking into the shop for a full minute whilst he tried to convince himself just to go home and go to bed. He had never been good with arguments and tried to avoid them with Gloria whenever he could, but sometimes she could be so damned… He felt his jaw tighten and his fists clench, and he pushed open the door and stepped inside.

The door gave a pleasant tinkle as it opened, then closed behind him. Once inside, he could see the whole of the store. It wasn’t big; just the two aisles he had seen from outside, filled with a variety of food that he recognised, if not the brands. To his left was a rack of newspapers and magazines, and his eyes scanned up to the top shelf automatically, looking for where the owner kept the titty-mags. He didn’t want one, in fact getting turned on was the furthest thing from his mind, it was just a reflex action. To his right, the wall was festooned with what he assumed were toys for pets: plastic bones, collars with bells, bits of rags that dogs would no doubt love to chew on. The service counter was beyond that. It was a wooden counter, smoothed at the edges, from years of use. The till that stood there looked out of place in today’s modern world; it was big and had a lot of brass. Mike would not have been surprised to see little numbers shoot up when the total was tapped in. The owner, Mike assumed, stood behind the counter, watching him and had done so since he entered. To be fair, Mike thought that he must look like someone that has just fell out of bed: his face was streaked with grease, his hair stood out at odd angles, and his eyes must be red-rimmed. As he approached the counter, the owner spoke to him.

“Help you, friend?” he asked in a cheery voice. Too cheery for someone at work this late, Mike thought. The man was in his late sixties, perhaps early seventies. What little of his hair was left, was silver and ringed his bald scalp.

“Do you realise the sign out font has a letter hanging down?” Mike’s voice must have startled the man, as he stepped away from the counter slightly. Mike noticed and it pissed him off. “The ‘b’” he said.

The counterman looked at Mike for a moment. He made no effort to move closer, but when he spoke, it was still with his happy-to-be-at work voice.

“Ah, you’re not the first person to say that,” he began.

“Well sir,” His voice wavered ever so slightly, which Mike also noticed, and it too, pissed him off. The counterman continued. “It’s been that way for as long as I can remember. I think it was like that when my father passed away. When my brother and I took over the running of the shop, we just left it that way. To remember our father, I suppose.” The counterman wiped his hands on his shirt and offered it to Mike.

“Right,” said Mike nodding slowly. He couldn’t decide if the old man was mocking him or not. He wasn’t sure why he was beginning to feel irritated. “Can you point me towards the beer?” Beer was the answer. The counterman pointed towards the back of the shop, and Mike nodded and moved away.

As he walked, he looked at the canned goods. This one had a picture of a fish of some kind, but the label was in a language that was not English, he was sure. Swedish? Dutch? He picked it up and turned it over; the whole label was Dutch or French or some damn language that he didn’t read. He tossed the can back on to his shelf, causing the counterman to throw a glance over to him.

Coming towards him, carrying a plastic shopping basket and pulling a canvas pull-along basket, was a lady. Mike placed her in a similar age bracket to the counterman, possibly older. She had what looked like some lettuce in the basket, some other vegetable he didn’t recognise, and several cans. She smiled as he approached. Mike noticed her teeth were slightly too big for her mouth, and he watched them as she drew nearer. When she was alongside him he touched her on her shoulder. The lady gave a noticeable twitch and turned to him.

“Can I help you, young man?” She smiled again.

She either had one tooth too many, or they were all slightly too big for her mouth. Poorly fitted dentures were not what concerned Mike: for a moment he thought he had seen her right eye – the eye that had been closest to him – flash yellow. When she turned and looked up into his face, the yellow was gone, replaced by regular old-person eyes. He looked down at the floor.

Mike moved away, leaving the lady mid way through her sentence, and after tutting loudly, she continued her way along the aisle.

Drawing with only one partially working hand is tough.
.
So the shadows are all wrong. The lines are mostly straight. Swings and roundabouts.
.
Another member of the horde
Another no-hand picture.