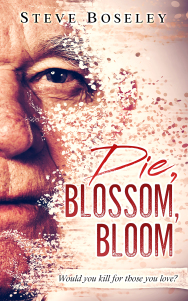 You can catch up with the last part HERE where you will also find links to the previous parts. Today, we are given a glimpse into Ted and Sissy’s life when they first moved to their idyllic village and some of the difficulties they faced.

If asked, Ted and Sissy would both agree that city life had been hard going. Monetarily rewarding, but soulless. The regular grind of the daily commute followed by eight hours in an office had taken its toll on the couple. Never having any children, they had both devoted the best years of their life to their careers, but as retirement loomed, Ted and Sissy made a decision to get out of the city, opting for a rural existence and a slower way of life.

Married for over forty years, they had a tidy sum of money in the bank, enough to buy a cottage in the sleepy village of Haverly. Significantly bigger than their city apartment, Sissy had worried about the maintenance and upkeep of such an old house. Ted was energized by the idea of a thatched roof, and crumbling bricks and mortar screamed retirement project to him. Sissy, conversely, could see vermin in the thatch and she knew Ted’s enthusiasm to tackle the project would be outstripped by the limitations of his aging body. Sissy’s doubts melted away when she saw the cottage, and any vestiges of uncertainty that remained, evaporated following their first night in the four-poster bed.

The cottage was not without its idiosyncrasies: creaks and groans as the original timber beams expanded and contracted each day, and doorways that required Ted to stoop to pass through. There was damp in the cellar, and dry rot in some of the timbers, but it was their cottage, and that made it special

It came with a decent sized front garden: a square of knee-length grass bordered by deep flowerbeds. Like many of the others in the village, it was restrained by a sandstone dry stone wall which was home to a variety of mosses and liverworts, which Sissy thought added to the ambience. Ted had wanted to hire a pressure washer to clean them off, but Sissy had stood firm and so they remained. There was a small back garden with a patio, a strip of grass, and a small tool shed.

Sissy adored being outside and all aspects of work associated with maintaining a country garden. Living in a tiny one-bedroom city apartment for so many years had deprived her of the chance for a garden of her own. As a young girl, she had watched her father care for their garden at home, and she longed to put into practice the things he had taught her all those years ago. As it turned out, Sissy was a natural. Her garden drew admiring remarks from even the staunchest locals, who had to agree that for an outsider, the woman had a talent for horticulture, although some of them did it through gritted teeth.

Their garden became an oasis of colour in the sea of sandstone and concrete that was Haverly. Sissy’s compulsion for gardening grew, and what seemed like every minute of her day was taken up with the garden. She could usually be found on her hands and knees in the soil filling the borders with annuals, or pruning the shrubs, although she did not shy away from the heavier jobs and had created a remarkable, sprawling rock garden that took up almost a quarter of the useable space. She had hauled the large chunks of rock in a wheelbarrow through the village streets, which drew disapproving looks from some of her more sedentary neighbours. When she wasn’t in the garden, she had her head in a book, consulting on some aspect of soil care, or looking up one plant species or other. The garden was a testament to her endeavours.

To Ted, the garden was Sissy’s domain. Initially, it was all she could do to get him out of the house and away from the TV. We’re in the countryside now; we should do countryside things she would tell him.

When finally coaxed out of the cottage, Ted would watch her for a while, before returning indoors. Never one to admit defeat, Sissy purchased a blue and white striped deck chair, which she opened out on the front lawn one day. She placed his newspaper by the side of it and dragged him out into the open. Once he had lowered himself into the seat and had his paper open, he had to admit it was quite a pleasant experience.

That was his first entry into the world of gardening: reading his paper while his wife worked around him. From there he graduated to putting his paper aside and watching his wife crawl around, digging and planting. He didn’t mind watching his wife who was, for a woman of her age, still very easy on the eye. Still life in the old dog yet, he would think. The couple had been married for over forty years, and Ted still marvelled at the spark he felt when he watched his wife work up a sweat. He would always sneak a smack of her backside when she passed him, and Sissy would, invariably, turn and glare at him, running her glasses down to the tip of her nose to peer over them. Ted knew she liked it though, and sex after a long day in the garden was always lively, even at their age.

Over time – a lot of time – Ted began asking questions and taking a more active involvement in his wife’s hobby, and if it were possible, the two of them grew closer. They shared the work evenly and eventually, Ted became quite the gardener himself, although he never felt that he achieved the same degree of success as Sissy. He marvelled at the work she put in. Tireless effort had created something beautiful. But not as beautiful as her.

That’s it for this week. Don’t get sucked in to thinking it’s a love story. It’s not. Well, it kind of is, but it…. Oh, just read it. There’s blood coming up.