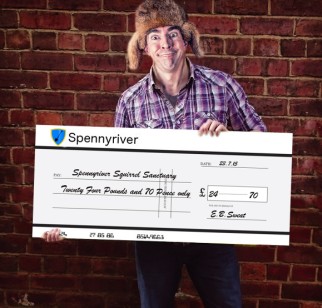 For those of you following Eric’s progress, this will already be his tenth fundraising effort this year. ‘Mr Charity’, as he likes to refer to himself, has raised money for a variety of worthy charities right here in Spennyriver, including The Sheila Wolfe False Kneecap Society, Hamsters Are People too, and most recently The High Arch Shoe Association.

For the last week, Eric has been buried alive in a glass coffin, six feet beneath the carpark of ‘The Ostrich and Wombat’ pub, to raise money for the Spennyriver Squirrel Sanctuary. He has only been able to communicate with the outside world by means of facial gestures and by twitching his ears, as he made the coffin just a bit too narrow. He has only had the food to eat that he took in with him, most of which looks like it had spoiled a couple of days in, and has been sloshing around in the three or four inches of urine that had been collecting, due to an oversight with the toileting arrangements.

Eric was unsealed from his coffin this morning and had this to say:

“A big thank you to all of you who gave money to such a worthy charity. Your generosity has raised almost £25 which will help to provide our local squirrels with enough food to last them to the end of the week.”

For up to date information on Eric’s latest campaigns, keep watching this space, or you can call the charity hotline on 111-HELP-ME.